Showing posts from April, 2013
Show All

In Between: Transitions and Dead Ends @ 67 Tempinis Gallery

To a graphic illustrator, a strong mastery of drawing line is of utmost importance – its curvature, thickness, and shading, defines the familiar form and spatial depth within a graphic.  In his first solo exhibition , commercial illustrator Shahril Nizam displays another facet of his artistic talents, with an impressive selection of paintings and sculptures produced in the past 5 years.  Simon Soon's stimulating essay in the exhibition catalogue, 'Urban Flux and Inner Vortex', describes Shahril's art as "plays to (the) concept of the roving, curious and implacable eye".   A general but accurate statement that suspiciously downplays the political title, also sidestepping the issue of force-fitting a theme. Suitors (2011) Upon entering Seksan's art repository, one's attention is drawn towards a wall that hangs a collection of 20 small paintings with fancy frames.  These works display a strong affinity towards an early-20th century European express
Post a Comment
Read Post » 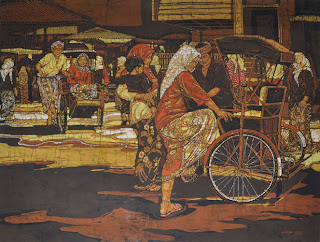 Out of good fun, I tabulated prices from previous auctions and assessed a "true value" to each lot in the April auctions, taking into account factors like significance within an artist's oeuvre, and its aesthetic value. I came out of both auctions in a sombre mood, not because of my wrong estimates, but a deep distaste towards the spectacle these events manufacture, whose aim is to fulfil a gap within the luxury market. It is depressing to realise the underdeveloped state of art consciousness amongst Malaysians, which to many is just a beautiful painting hung on a wall. The prices in these auctions reflect this thought, where fine art is just a display object for the rich. Going up: Ismail Mat Hussin - Trishaw Stand (2005) Observant traders will delight in the 56% and 460% returns, for Latiff Mohidin and Abdullah Ariff works bought at Christie's just two years ago. A rising demand was apparent for the works of Ahmad Zakii Anwar, Chia Yu Chian, Ismail Mat H
Post a Comment
Read Post »

Geometrical shapes, classical allegories inspired by Caravaggio, and negative space, are not supposed to go together.  Somehow Wong Chee Meng makes this combination work, with this series of bright landscape works, painted in beautiful shades of blue and white. Men from the Island (2013) Trace lines that depict horizon & perspectives in a painting, are deeply embedded via cuts of varying thickness directly into the fibreboard.  In 'Men from the Island', these lines invoke movement in the group of Asian men, its horizon point drawing attention away from the underlying Western men.  A similar effect is applied to 'Emerging', where its large circles stagnates the urgency shown on the two girls' faces, and flowers cover the scene underneath that denotes progress in the physical sciences. Emerging (2013) - 80% completed I remain perplexed even after comparing snapshots of Chee Meng's work process shown in the catalogue,  with the actual paint
Post a Comment
Read Post » 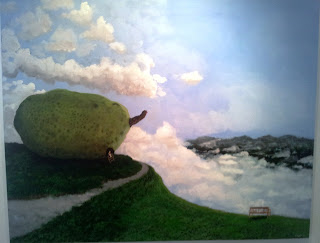 Viewing Yusof Majid's exhibition "The Peninsular Series", especially after other solos earlier this year by naiveté artists Yusof Gajah and Fauzul Yusri , makes me ponder upon one's notion of the search for innocence.  The adult perspective cannot hide behind these large whimsical landscapes, but perhaps serve as an escapist fantasy to the harsh realities of daily life. Frasers Hill (2013) A delightful nangka perches atop Fraser's Hill, providing its occupant a cool respite from the city, hidden below underneath thick white clouds.  Three large Rafflesia flowers emerge from the Kelantan forests, while an oversized chilli floats down the Perak river, threatening to throw thrill-seeking children overboard.  In 'Raub Honey Tree', a central composition complements the artists's skill in drawing night, creating a mystical yet familiar atmosphere that envelops the moonlit summit.   Kelantan River and It's Three Giants (2013) Yusof i
Post a Comment
Read Post » 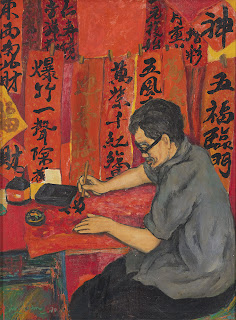 The art auctioneer threads cautiously in this uncertain economic climate, quoting curiously low estimates for small works by Latiff Mohidin and Ibrahim Hussein.  The Chang Fee Ming that graces its catalogue cover is new and grossly expensive, while the smaller but more interesting painting of a Bali wedding scene is under-valued.  Ethnic Chinese artists typically fetch unpredictably high prices, but a gem is spotted in Chia Yu Chian's 'Calligrapher at Work'.  Red + black, and Chinese calligraphy cover the painting, whilst the middle-aged man hones this traditional craft for a living, oblivious to his immediate surroundings. Chia Yu Chian - Calligrapher at Work (1970) A scratching technique carves through the oil paint in Ismail Mustam's 'Ribut', illustrating an active landscape where trees sway in the violent wind.  It is remarkable that this skilful execution was by the artist when he was only 16 years old!  Ismail's mentor Patrick Ng elongates his
Post a Comment
Read Post » 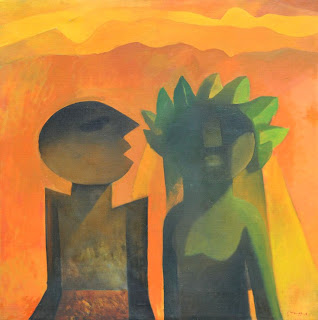 The ambitious gallery trudges on in with the third edition of its art auction, featuring many sketches, and works in underwhelming conditions.  10% of artworks are from the past 3 years, not including 7 undated pieces.  Collectors look to cash in on Yusof Ghani and Khalil Ibrahim, while the organizers tempt potential Asian investors with an early lithograph by auction house favourite Zao Wou-Ki. Khoo Sui Hoe - The Wedding 1 (1980) Instead of promoting Ibrahim Hussein and Latiff Mohidin each time, Malaysian art auction organisers should recognise logical groupings in the works being offered, and promote artistic merit when the opportunity arises.  Three accomplished and distinct pieces from Khoo Sui Hoe provide a good avenue to display the artist's portfolio - a fauvist palette complements the mysterious portraits in 'The Wedding 1', perspective and texture take centre stage in 'Clouds over the Rocks', and child-like drawings represent the 'Innocence Serie
Post a Comment
Read Post » 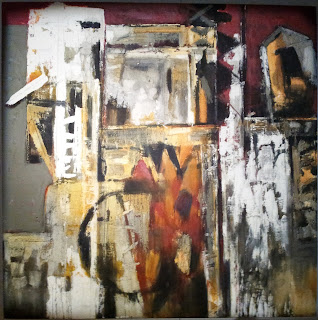 It is with shock when one hears of news that an Ibrahim Hussein mural was painted over with lime paint, but thankfully the university has taken restorative actions, while continuing to invest in Malaysian art.  A cosy gallery with good lighting, visitors to UMAG are greeted through a small doorway into the collection, where significant pieces by Ib, MF Husain, Suzlee Ibrahim, and Latiff Mohidin are on display. Awang Damit Ahmad - Iraga (Dari Jendela Ini) (2007) Awang Damit Ahmad's 'Iraga' stares out to the viewer with a nasty gnarl, its nightmarish palette and powerful lines make for a startling impression.  At both ends of the gallery hang giant canvases by Zulkifli Yusoff, his patriotic sympathies beautifully drawn out within monochrome spaces.  With 4 mid-career artists in residence currently, including the likes of Juhari Said and Maamor Jantan, the university is taking all the right steps towards establishing itself, as a champion of the visual arts among othe
Post a Comment
Read Post »

Not for Sale @ White Box

"Not for Sale" exhorts artists and collectors to exhibit in public a personal artwork, which they have no intention of selling (for now).  A-list artists like Jalaini Abu Hassan and Ahmad Zakii Anwar display pivotal works significant to their respective careers, while others generously offer sketchbooks to allow a peek into their thought process.  Statement works by Gan Chin Lee and Marvin Chan denote a strong social conscience, while Izan Tahir's lip-smacking papier-mâché masks are probably too irresistible for the artist to part with. Nazli Aziz - Malaysia Airlines (1972) / Fauzul Yusri - Once Upon A Time (2006) The interesting works exhibited are mostly from collectors, as they narrate the significance of some very personal choices.  Intriguing stories lie behind the loaned pieces by Vincent Sim and Joshua Lim - the former a touching tale of respect and belief, and the mysterious coincidence of a missing Chang Fee Ming painting in the latter.  Local director U-
Post a Comment
Read Post » 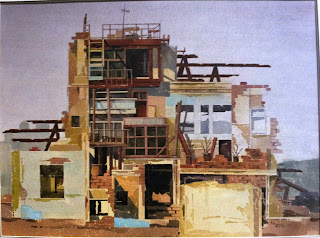 A couple of tranquil pieces by Syed Thajudeen and Hoe Say Young are displayed, but what I find most interesting in this cultural exchange exercise, is from a young Chinese artist.  The construction of a house is illustrated, a sombre palette indicating the cold weather and hazy sky.  A common sight in China, the painting infers that its society is also a work in progress, its outcome very much an unknown quantity, like this building. 涂咏虹 - 岁月 II [Tu Yong Hong - Years II]
Post a Comment
Read Post » 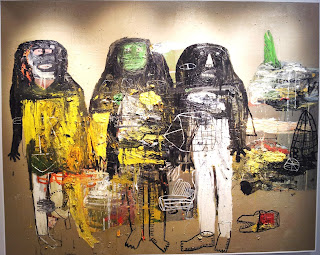 Perception drives a reality, where the creative mind reacts to this reality with a multi-tiered response, that is formal and scientific in its experimental approach.   Fauzul Yusri is one such visual artist, who reacts to the environment, but remains clear-headed about his artistic progression, without veering away unnecessarily from an established style. Kroni (2012) Political gibberish and deference to power, are the obvious themes on display as one enters the living hall area.  Dark ugly figures are surrounded by random floating objects, where the occasional vibrant colour emerges from an underlying layer of paint, via Fauzul's signature scratching technique.  Tubes of colours stack atop each other like lizard shit, that form the tiny brain within 'Ketua Kata'.  This approach towards creating texture, makes use of the medium's quality to diffract light and create an active body, used to represent a figure's heart within this series. Mimpi Jadi S
Post a Comment
Read Post » 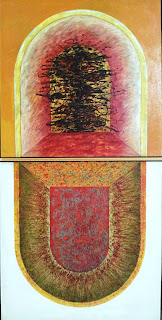 Moving on from the Pago-pago figures in part I , is the meditative period of Latiff Mohidin.  Lauded by some, I find the domed doors of "Mindscape" series, and the fishing boats of "Langkawi" series, to be outwardly boring.  In "Mindscape", archways that draw the viewer in with its content, display a highly-controlled approach towards painting, despite the flicks of colour that dot the canvas.  Mindscape 18 (1983) A couple decades of introspective works later, Latiff paints his observations of nature in a large-scale format, that make up the "Gelombang" and "Rimba" landscapes.  Powerful waves are marked in bright colours in the former series, creating textural layers that imbue a dynamic quality into the paintings.  In the latter series, the dense and humid tropical forest, is illustrated in broad strokes of earthy colours, where dark branches suffocate the space within. Pemandangan 5 (1986) In the early-1990s paintings
Post a Comment
Read Post »
More posts