Showing posts from September, 2014
Show All

Up Your Alley @ The Print Room 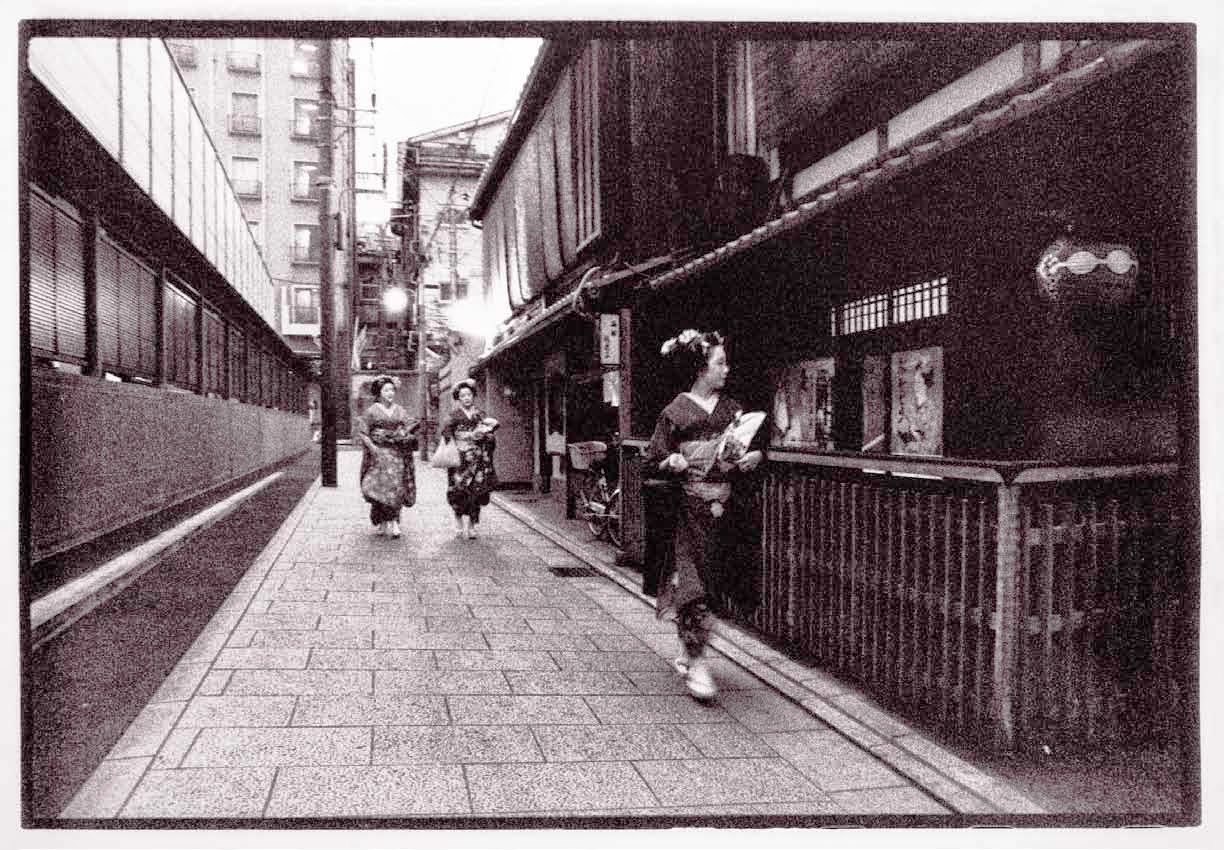 Framing pictures and creating contexts are the basic skills photographers need to utilise, and street photography provides one avenue of expression that tests these competencies. Guest submissions offer forgettable snapshots, as compared to the studio’s usual line-up. Linda Chin continues her focus on the subject of women, with a picture of Kyoto geishas strolling in the late evening, and another of one geisha bowing as a respectful act. Complementing these photographs is one snapshot of umbrellas crowding underneath an affectionately-titled signboard in Jiufen 九份, tying her exhibits under the exploratory theme of cultural clichés and concealed gestures. Razlan Yusof’s pictures are taken when the decisive moment is secondary to the exotic subjects, his choice of black & white dampening the foreign images. Linda Chin - Gion 1 (2014) Paul Gadd shows off his confident technique with coloured and beautifully-framed  photographs, taken in Korean subway stations and Banglade
Post a Comment
Read Post » 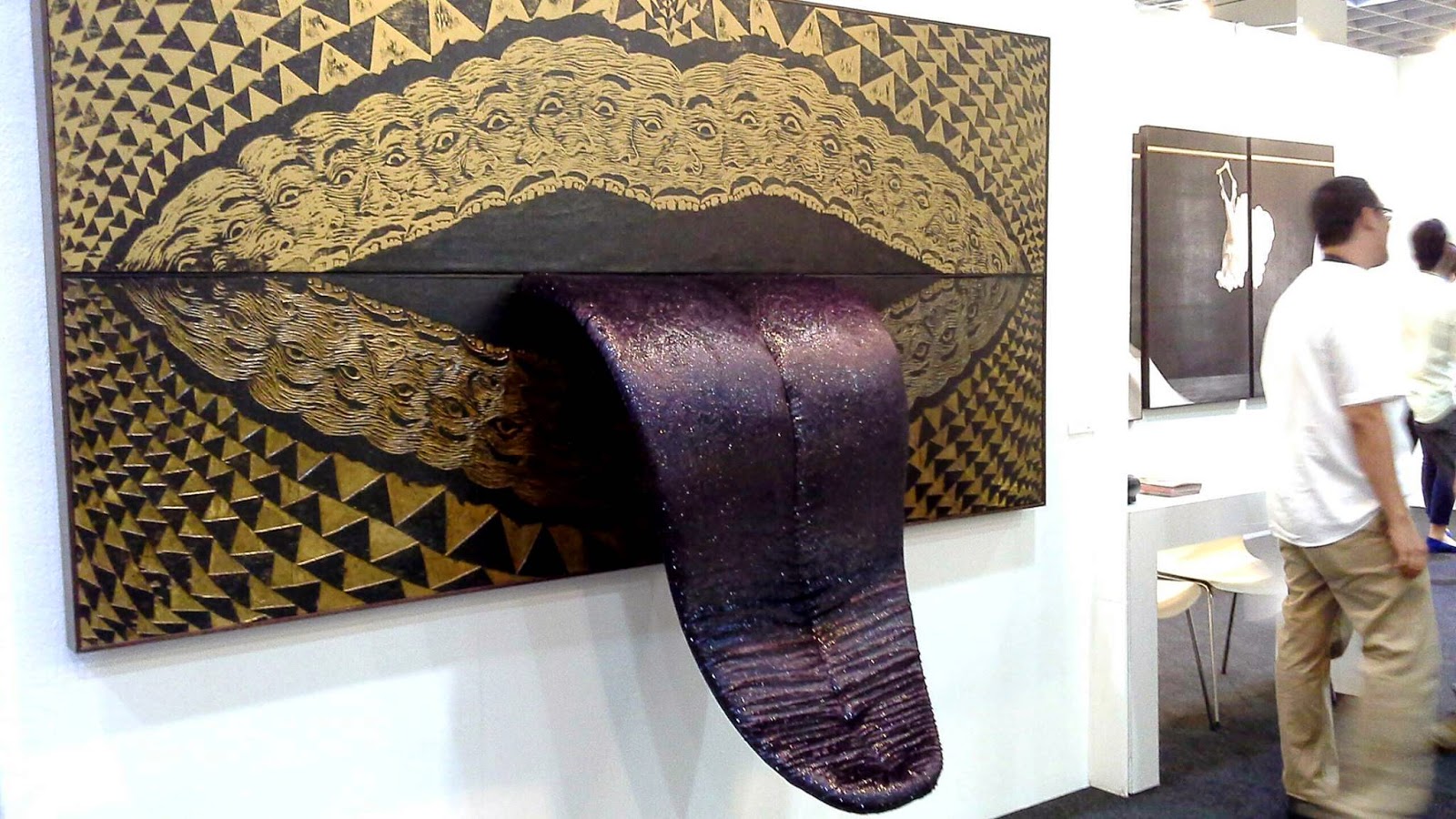 Despite occupying a larger space and expecting a larger crowd, the overwhelming presence of rectangular paintings and metallic sculptures mark this year’s exposition as a collective bore. Hard-edged works are glimpsed at the Austrian embassy and Fujian Contemporary, but otherwise one has to settle at the Taksu booth for good international art, at the same time taking in Sabihis Pandi’s deliciously quirky ‘Slurp’. Azad Daniel’s clever phone covers and Zulkifli Yusoff’s multilayered grids draw visitors into the GCMA section, the latter work’s subdued tone and long texts depicting the necessarily tedious nature of a government program. Other local art galleries and solo booths peddle new works, some at inflated prices, as artists and collectors capitalize on art as commodity. Installation view of Sabihis Pandi - Slurp (2014) [picture from Studio Pohon Rendang 's Facebook page] Henry Butcher’s displays include captivating large works by Ahmad Fuad Osman and FX Harsono; Otherw
Post a Comment
Read Post »

Man of the Times @ NVAG 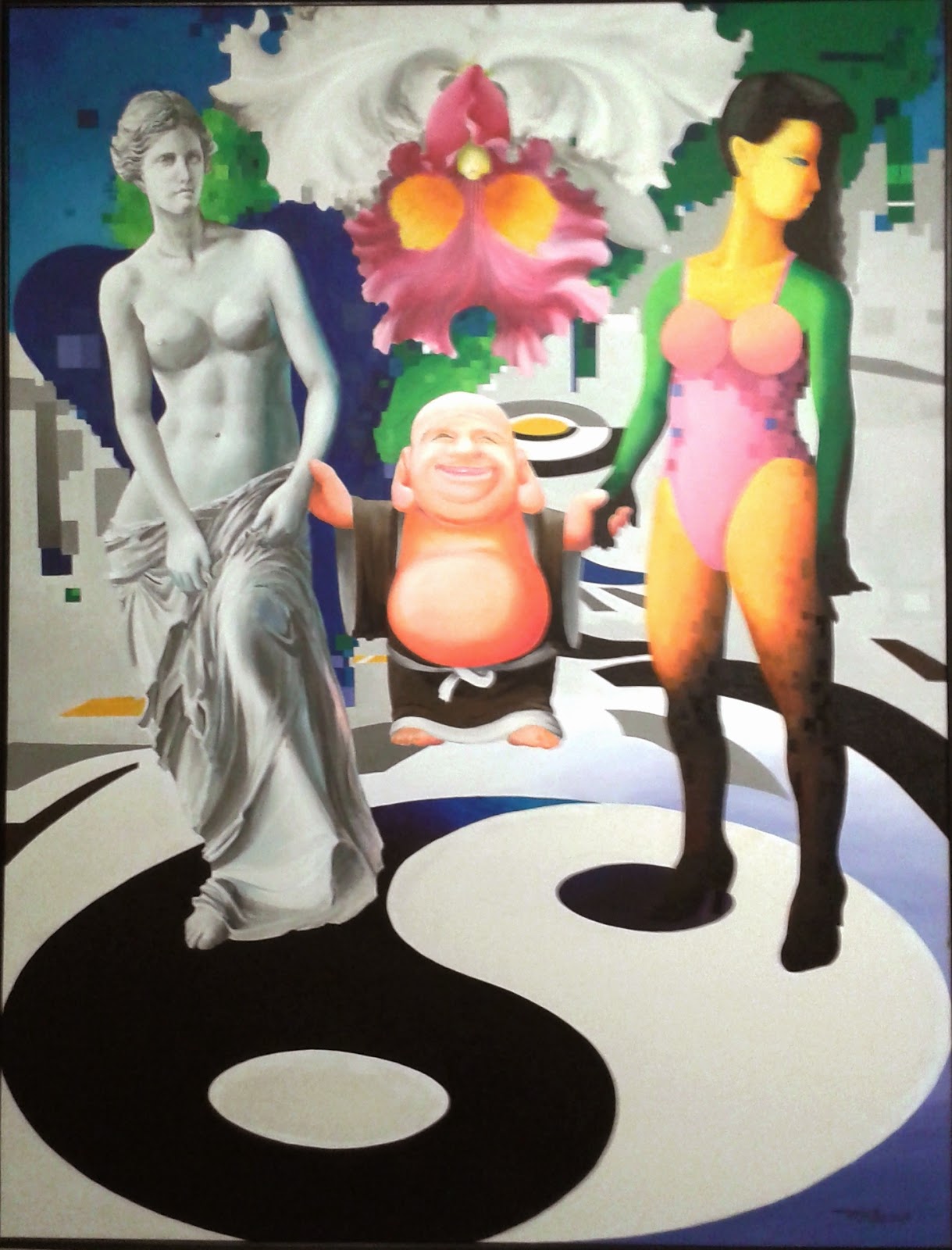 Entering Long Thien Shih’s retrospective exhibition, the visitor is greeted by a figure in white hazmat suit, holding out a rainbow-coloured banana. Known for his surreal prints, what is revealing about this 2013 image is how it is no longer surreal, or perhaps reflects the surreal times we live in. Early paintings denote a strong influence by Cheong Soo Pieng, as the artist recognises that his change in approach happened after joining the Wednesday Art Group. Experimentations include sewing a ‘Kampung Nelayan’ scene onto burlap, and illustrating a cubist perspective of tin mine workers in ‘Big Investment’. At 20 years old, Thien Shih studied lithography in Paris, also enrolling at Atelier 17. One wall exhibits his output during this time, the drawings resembling Cheong Laitong with its gaudy colours, but its sinuous lines are evidence of his tutelage under Stanley William Hayter. Let's Joy Together (2009) Hung at the end is ‘Susan’s Birthday’, a sexually explicit drawing
Post a Comment
Read Post » 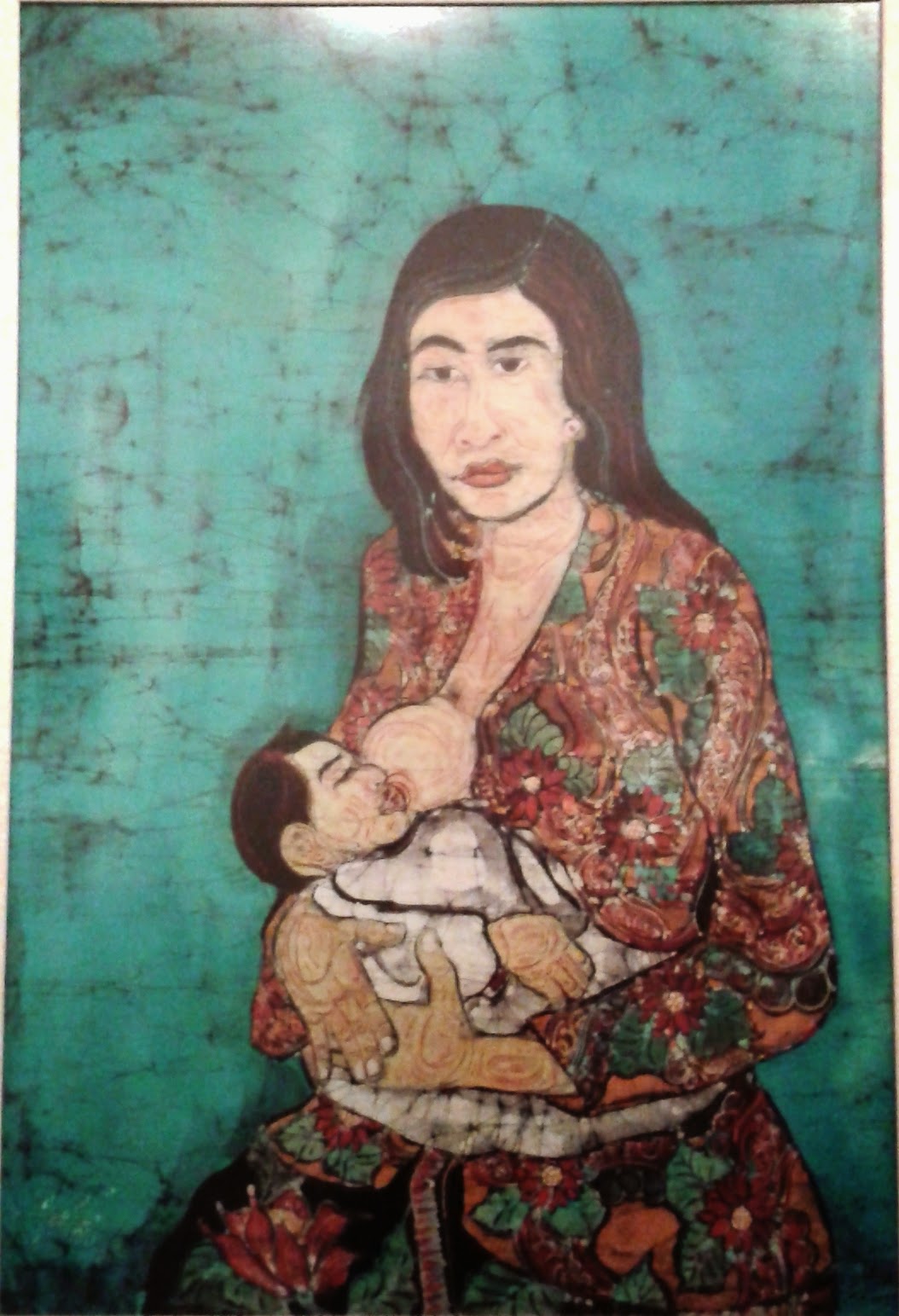 Strolling past the gallery, an eye-catching work by Mustapa Ibrahim draws one in, ‘Bahasa Gerak Badan (Diptych)’ a wonderful tribute to fellow Anak Alam member Zulkifli Dahalan. Hung beside is a beautiful rendition of the National Art Gallery’s former site, Mansor Ghazali’s oil painting a captivating scene with dark clouds overhead. Brilliant turquoise sets off the illustration of one breastfeeding mother, Yusof Abdullah’s simple lines capturing the expression of practical tenderness. Above average works by established painters like Yusof Ghani and Bayu Utomo Radjikin are also on display, this selling collection superior to the typical auction house holdings. Replications of celebrity photographs aside, Jalaini Abu Hassan’s ‘Fish and Tree’ recalls a time when the artist employed collage and abstraction, yet his signature style of utilising bitumen and drips were already obvious.  Yusof Abdullah - Ibu (1979)
Post a Comment
Read Post » 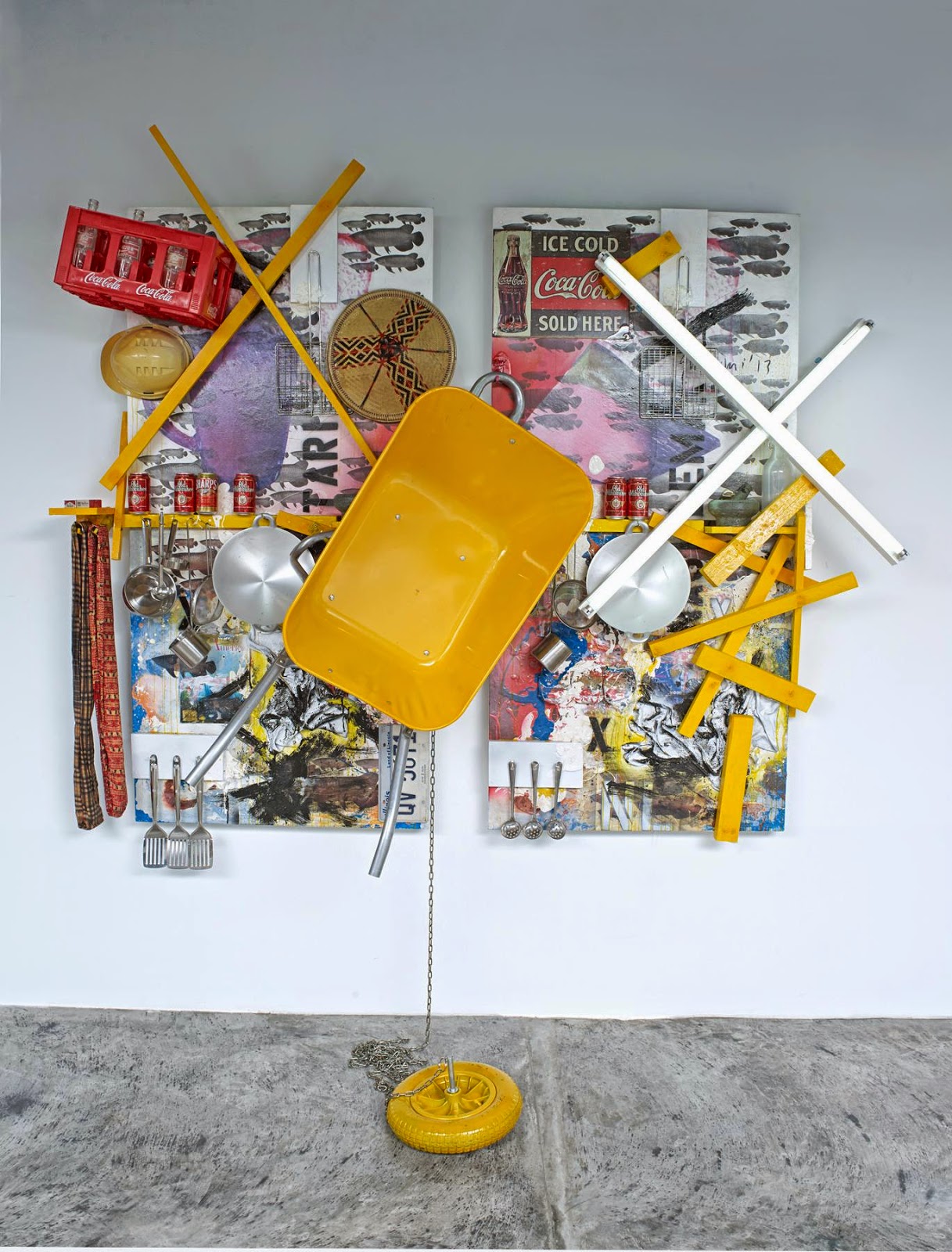 Two galleries collaborate to occupy a large exhibition space in the upcoming Art Expo, displaying new works from a collector’s stable of favourite artists. Hamir Soib’s giant canvas is the show’s highlight by virtue of its size, the golden steed (RM 200,000) a poor follow-on painting from last year’s big fish. Another horse takes the shape of the Ferrari logo, made by Al-Khuzairie Ali for his current series of ceramic skeletons. Two constructs on pedestals by Umibaizurah Mahir intrigue, while Ahmad Shukri’s shoddy ‘Open House ‘SOLD’’ (RM90,000) looks terrible in the presence of Azrin Mohd's work, whose unambiguous found object aesthetic is superior to Shukri's. Suhaimi Fadzir hangs up tools (RM 110,000) used by construction workers and food stall operators, one golden detached wheel on the floor reminding all to take a break. It also acts as a prompt for Malaysian art to stop making superficial claims about perpetuating national unity . Suhaimi Fadzir - ’Warung Kita: Te
Post a Comment
Read Post » 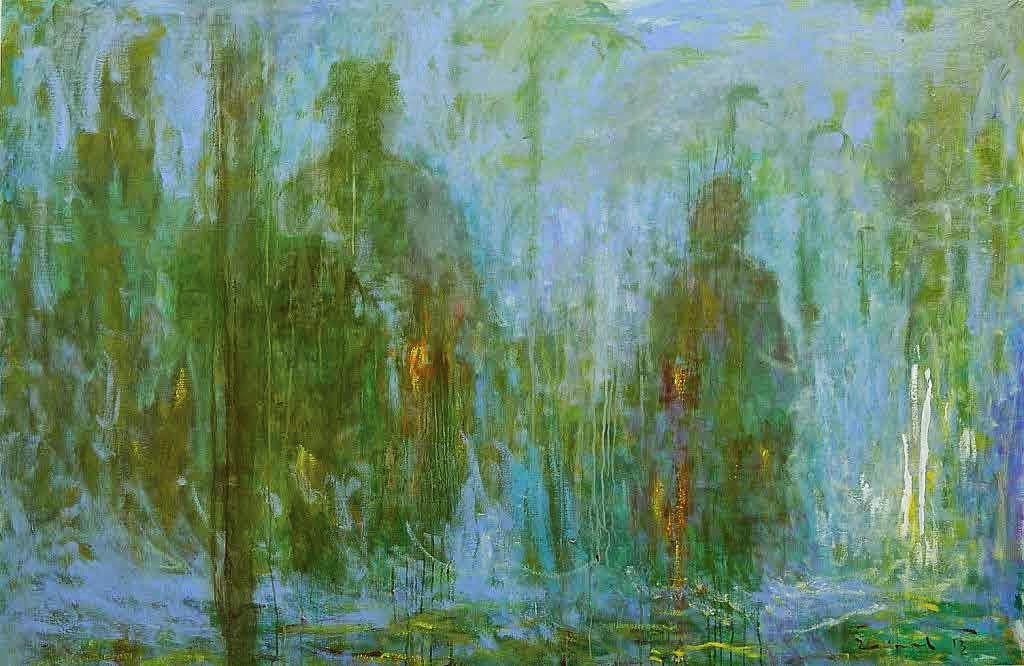 Beautiful renderings of nature are considered a mockery to contemporary art, but deserve its own category in the local art canon, where a resourceful and peaceful environment has greatly enriched many Malaysian lives. Zainal Abidin Musa escapes his day job to paint monsoon storms on the peninsula east coast, employing an impressionist approach that captures the “Tengkujuh” season. This outdated mode projects a persisting attribute that illustrates effectively long spells of rain, especially in the dissolved scenes painted on linen, a fabric that deteriorates fast in humid weather.  Sketches made for this series indicate a high level of technical skill, and are rightfully exhibited alongside a body of work which spans five years. Blue and yellow pastels on brown paper draw one stunning river panorama, while purple watercolour clouds enchant with its transparent qualities. Pagi di Seberang Takir (2013) Curator Azzad Diah Ahmad Zabidi describes Zainal’s weekend trips in trans
Post a Comment
Read Post » 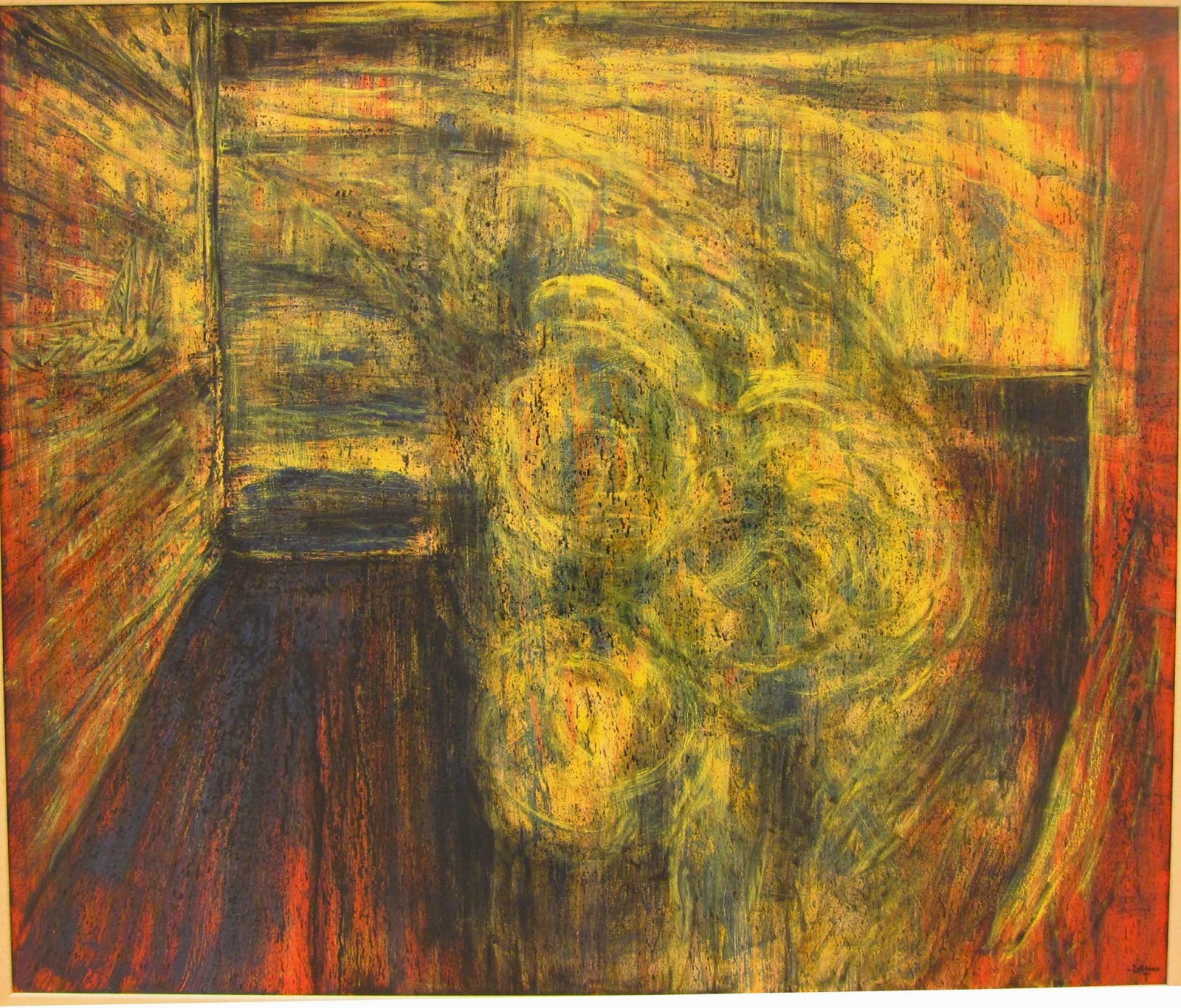 As compared to one assertion that Latiff Mohidin's latest series of works emanates from two 1965 drawings, Johnni Wong's opinion is more germane. He writes , "(b)oth his parents were Minangkabau and to this day, Latiff is still enamoured with the Minang world view, which includes "the acceptance of the paradox of life". The Minang proverb alam terkembang menjadi guru helps sufficiently to apprehend Latiff's art, contrary to T.K. Sabapathy's ornate proposal to "rethink his entire painting practice and to weigh it chiefly and specifically as embodying landscape as a presiding idea or concept." "Seascape" features similar compositions of rocks jutting out to the sea, with a horizon in the distance. In an interview published in the catalogue, Latiff claims to portray silence in these pictures, which kitschy titles make reference to Chopin and Debussy compositions. Interior Landscape 3 (2010) Another exhibited series "Ne
Post a Comment
Read Post »

There is nothing outside the text @ Lostgens' 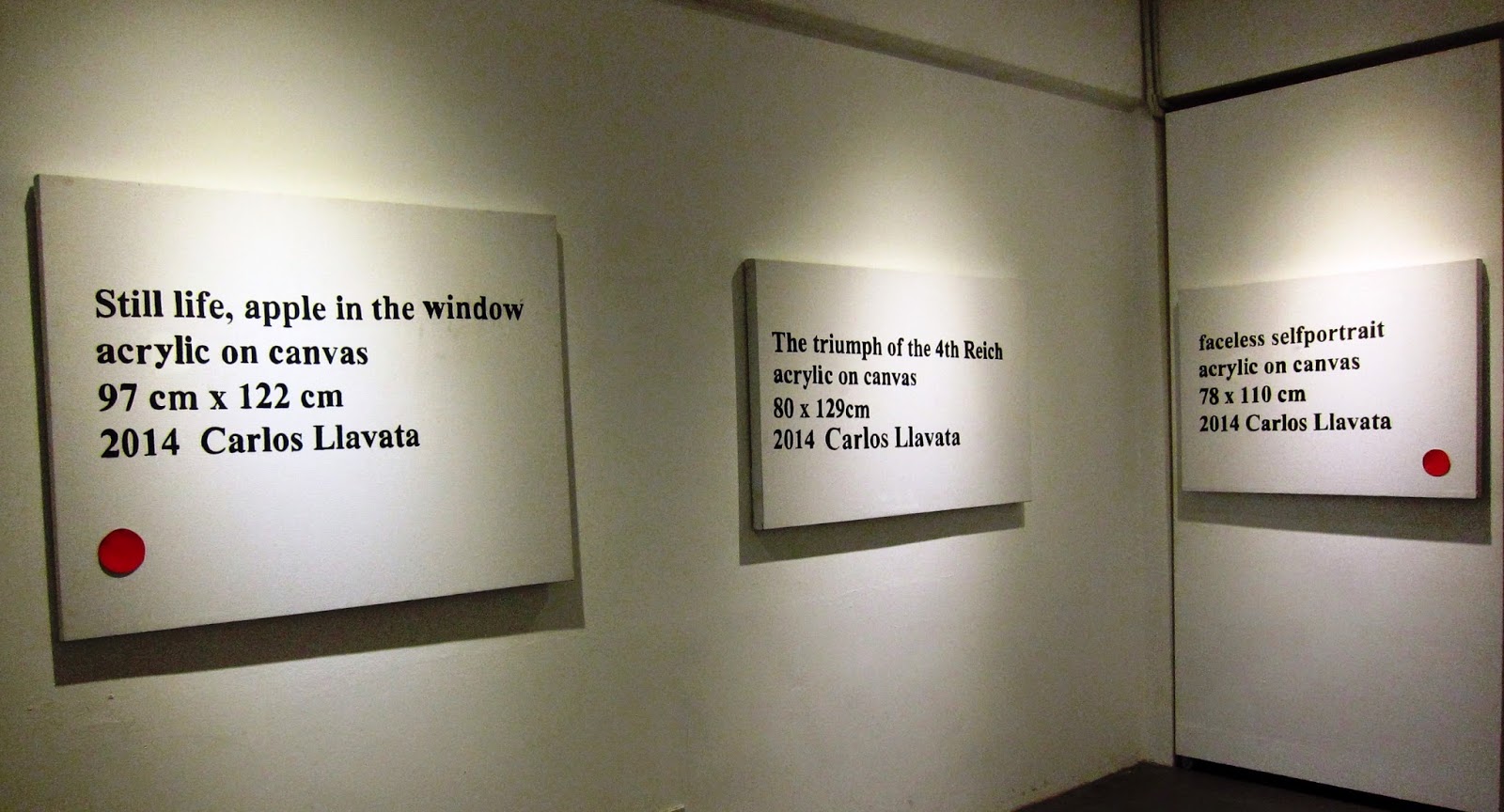 Entering a white box gallery, one looks around and immediately sees the circular dots stuck onto printed labels. Each red spot indicates a measure of success – a well-regarded artist, surely. The gallery attendant flashes a welcoming smile. There must be something in the art shown here… Entering a museum exhibition, one framed painting is hung prominently on a black wall and spot-lit. The small label beside the artwork indicates the artist, title, dimensions, year made, medium, and sometimes its owner. The museum sitter’s expressionless face reminds one to be solemn. There must be something in the art shown here… The dot and the label are exaggerated in “There is nothing outside the text”, representing art as a consequence in this capitalist world. Carlos Llavata’s amplified paintings/labels address haphazard topics beyond those quoted, his utilization of texts as visual cues humorous when critiquing modern painting genres like ‘Still life, apple in the window’ and ‘facel
Post a Comment
Read Post »
More posts