Showing posts from December, 2015
Show All

In a year when I lost faith in painting, the number of art events doubled, as compared with my listings two years ago. Large paintings – especially figurative literal statements and beautiful gestural abstracts – continue to be snapped up quickly in the primary market, leading to a deep reflection about the act of collecting. Despite a stagnant secondary market, the art economy was constantly discussed in conferences and symposiums, while non-commercial art spaces soldier on without institutional funding. A single regret will be missing the three shows that Satu Kolektif (Elias Yamani Ismail) participated in this year. Otherwise, following in the tradition of my favourite non-authoritative end of year awards, my 2015 Kuala Lumpur visual art highlights include… Chang Yoong Chia – Love at First Sight (Photo Edition) (2011) Printmaking : The medium was aptly celebrated on Labour Day at “ Peasants and Proletariats ”, which organiser Xin Art Space started its first year promis
1 comment
Read Post » 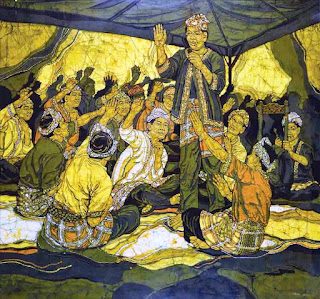 As an auction house diversifies to sell designer furniture and signed art prints, another gallery opens in Klang with its owner claiming that art investment “…offers yields ranging from 10% to 100%.” Five auctions were held across four months with close to 700 lots on the block, with GST now firmly included as a transactional cost. With Christie’s and Sotheby’s jostling for significant works from the emerging Southeast Asian market, local players have little to offer, although a great batik piece by Ismail Mat Hussein was spotted at a Petaling Jaya gallery. In that October fire sale , the first 38 lots had starting bids of RM 1,000, while a couple works by Yong Mun Sen and Chen Wen Hsi seem under-priced. Ismail Mat Hussein – Dikir Barat (1995) Masterpiece’s August edition sees all three available works by Jalaini Abu Hassan brought in, a bizarre occurrence that says little about the Malaysian secondary art market. Penang paintings see a dip in prices, while a couple artis
Post a Comment
Read Post » 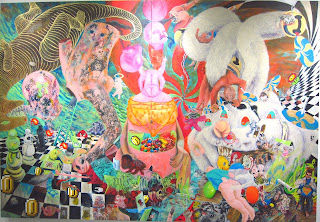 An upside-down wind-up toy dinosaur sucks the head, off a dismembered torso covered with spectral bodies traversing into a fluorescent river. The fist-turned-snout lies upon a zipped-up chessboard, where a hand clutches the blue sky as ransom, and a rat looks ready to pounce. Nightmarish cartoon creatures are partially consumed by a giant white bunny, its steel bells ringing an imaginary cackle. Lollipops and one inflatable human doll float past; more sweets are found in the belly of a pink torso spouting out heads from its neck. Beside it is a swirling design that denotes the origin of this apocalyptic landscape. Various ghastly beings patrol the whole area, littered also with familiar and superbly-scaled objects from Super Mario Bros.  We are at the gates of hell. Except, there is no heaven. Cycledelic (2011–2015) One paragraph is insufficient to describe Tey Beng Tze’s four-year-in-the-making ‘Cycledelic’, as is the typical issue in naming all the symbols present in his w
Post a Comment
Read Post » 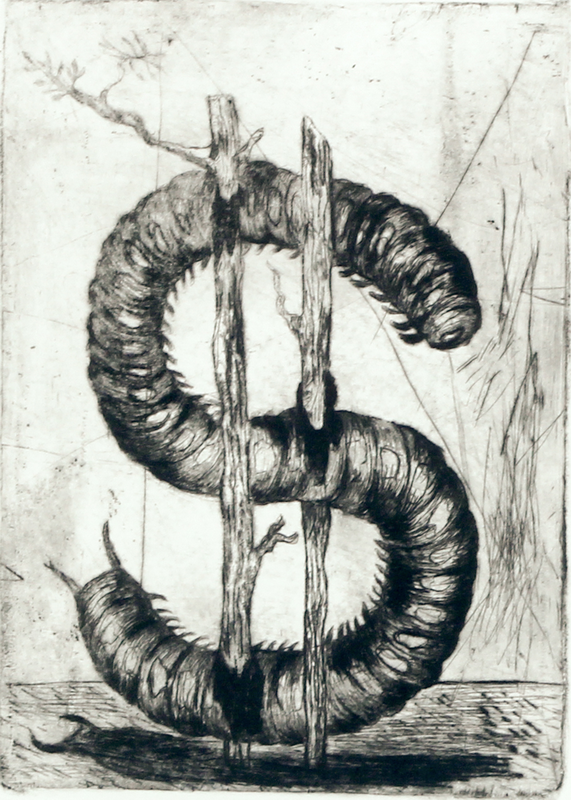 Compared to recent painting exhibitions that examine the act of painting beyond just image-making, creating prints are relatively straightforward. Even so, a good understanding of one’s medium is a pre-requisite in contemporary art. Surreal and abstract pictures describe the majority of exhibits here, where colourful silkscreens with subversive intentions fail to impress. Mark Tan’s building outlines subscribe to an outdated minimalism that obscures his progressive approach, while leafy prints by Agnes Lau Pik Yoke present dull images. Scratchy lines contribute to a disturbing charm in Fadhli Ariffin’s works, the dirty aesthetic and temporal nature of drypoint making it a suitable technique to illustrate corrupt power.  Fadhli Ariffin - ‘Private Message' (2015) Different from his signature mirror-image woodcuts, Sabihis Pandi’s linocuts are overly dense, notably distorting the two-tone picture ‘Jerat’. Other test prints/ trial proofs hang nearby, where I stand captivated
Post a Comment
Read Post » 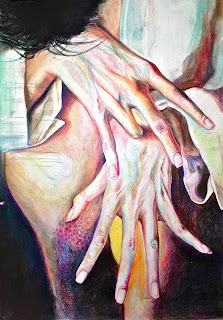 Ablution – the act of washing oneself – is a common ritual in many cultural and religious customs. Practical upkeep of personal hygiene becomes a symbolic cleansing gesture. In Sophia Kamal’s paintings , this practical-symbolic line of reasoning walks a tightrope, as the act of removing makeup becomes synonymous with the Islamic ablution procedure of Wuḍū . The water-covered faces in ‘I Am A Dream Still Dreaming’ and ‘Milk and Honey’ depict different stages of one washing up, its symmetrical physiognomy pointing to the paradox of showing beauty. Why put on makeup if it conceals the truth? What is clean and what is pure ? Why paint if the truth can never be painted? I Am Never the Same, Twice [picture taken from Sophia Kamal's Behance site] Prominent facial features, slender fingers, and dramatic poses, identify Sophia’s subjects as real life models. Pink and turquoise hues highlight a prettiness that do not diminish, despite the figures’ fidgeting gestures and anguishe
Post a Comment
Read Post » 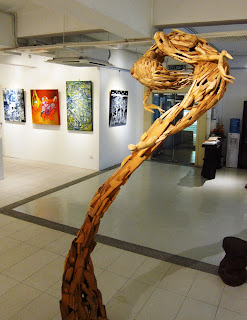 In the catalogue essay titled Rhapsodies of A Different Kind of Singularity: A Celebration of Malaysian Outsider, Naïve and Self Taught Art , curator Tan Sei Hon states the reason behind his interest in artists categorised as stated. “…(D)ue to their unique and personal approaches which differ markedly from the academically trained and conventionally inclined. Their private visions, fantasies and yearnings materialised in their own visual vernacular offers us a glimpse of the dimensions of the self unbounded by the tyrannies of conformity and standardisation. They believed unswervingly in their own artistic ingenuity and stubbornly refuses to sheepishly observe aesthetic formalities still shackled to dated or popular ideas about ‘Art’ taught in art academies, celebrated in the mainstream and sold in the marketplace.” Installation snapshot of Cheev – How High Can You Dance? (2013) As an art enthusiast, I have to utilise formal knowledge to appreciate the artful creations exh
Post a Comment
Read Post » 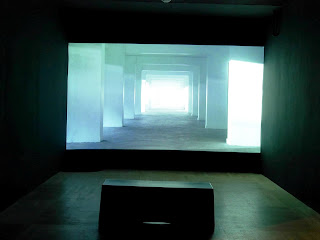 Two giant bent cigarettes lie on the ground, the masking tape around it reminding one not to touch this glossy object. Look hard at Robert Zhao Renhui’s photographs and the camouflage falls away. Unlike Chris Chong Chan Fui’s botanical drawings, which the exhibition catalogue informs are actually artificial flower renderings. An overhead projection shows a rope floating in the sea, or if one prefers to sit, there is a six-minute video focusing on the far end of a void deck in Singapore’s ubiquitous apartments. A row of small photographs capture cineplexes from a bygone era, while colourful furniture and posters are displayed nearby. The gallery entrance is painted in yellow and black diagonals like a barricade, and the only available wall text is a description of a national flag. This is contemporary art, as curated in Singapore. Installation view of Perception3 - Terminus (2008) [picture taken from Michael Lee's Facebook album ] As “…an exhibition that commemorates neigh
Post a Comment
Read Post » 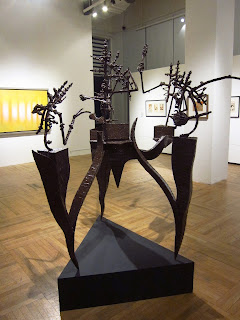 Modern Malaysian artworks are rarely spotted outside private homes, and one has to rely on auction houses and galleries for such viewing opportunities. Walking into Fergana’s “Collectors Show” , the visitor is greeted by a dramatic Ismail Mustam picture, balanced out by an uplifting scene by Ibrahim Hussein in similar hues hung at the side. Sensual forms appear too on recent paintings by the former, which along with abstract works by Jolly Koh and Syed Ahmad Jamal, surround an astonishing steel sculpture titled ‘Mengadap Rebab’. Mad Anuar Ismail depicts the opening ritual in Mak Yong as a network of elevated islands, where the orchestra musicians and Pak Yong surround Tok Minduk , the five stylised figures perched upon a three-prong base. Installation snapshot of Mad Anuar Ismail – Mengadap Rebab (2009) Exaggerated forms inject vitality to the troupe, a figurative expression echoed in the preparatory drawings by Joseph Tan displayed in the row behind. Anurendra Jegadeva once
Post a Comment
Read Post »

Gan Chin Lee writes at his web log (in 藝術與現實的念想之間 , and translated by this author), “I am a painter, whose chief concern is to resolve painterly issues. My artistic expression is in the form of social realism; I still believe in realism and its distinct expression, which moves me deeply.” Seven diptychs draw immigrants within a localised setting, along with a single wall presenting captioned photographs and news snippets that support the artist’s documentation process. The contrast immediately stands out; as a reviewer describes , “…works in In-Between are divided into two: a large section drawn and coloured in a more realistic manner, and an accompanying piece presented in a more raw “work-in-progress” style.” Like wine with good food, the majority of pairings are forceful. Why are the diptychs not a problem when I first saw  the exhibition ? Self and the Other (2013-2014) Representing people is Chin Lee’s intent, and figures are the dominant subject in his paintings. A
Post a Comment
Read Post »
More posts