- July 28, 2013
The Rijksmuseum is less attractive after its lengthy refurbishment, where an overwhelming Dutch pride clouds the individual brilliance within its collection. Pleasant discoveries this visit include the bright & positive depiction of a windmill by Paul Joseph Constantin Gabriël, and rowdy scenes of common life by Jan Steen. Labelled questionably as a moralist, 'Mayor of Delft and his Daughter' exhibits a deft execution that cleverly embodies the themes of patronage and social landscape. Jan's more intimate paintings are equally allegorical as his famous farcical ones, but capture details in a more exacting manner.

Stedelijk Museum has a fantastic permanent collection, that covers significant art movements from the early 20th century. Besides an insightful chronology of Kazimir Malevich's progress towards suprematism, and a well-curated room on expressionism, I seek out Herman Kruyder and Charley Toorop, whom each provide a unique post-war perspective in Dutch modern art. The evocative portraits of Parisian life, and people at the beach, by Ed van der Elsken and Rineke Dijkstra respectively, stand out within its famed photography collection. Delimiting a space among contemporary artists, Marlene Dumas' sensitive wit prevails in her works, which illustrate a critical view on the current state of affairs, while maintaining an expressive painterly technique.

It is difficult not to like Vincent Van Gogh, despite an ugly start to his short career. The "Van Gogh at work" exhibition aims to describe the way of working throughout the artist's lifespan, and does an admiringly good job. Historical analysis and current scientific findings are presented in an interactive environment, tracing the tale of an obsessive artist that was methodical in his rebellion against academic conventions. Enlightening displays include a detailed exploration of palette preference ('Quinces, Lemons, Pears and Grape'), and different brush strokes ('View of Auvers'), that culminate in the wonderful landscapes of Van Gogh's late works.

Photojournalism highlights the plight of many suffering in this world, and is an especially powerful tool when allotted a context, such as when displayed in the annual World Press Photo exhibition at the Oude Kerk. Malaysia has two representatives among this year's winners - Stefen Chow capturing Chinese dissident Ai Weiwei's mug shot, and Chen Wei Seng bagging a sports action award for a Sumatran bull race. The majority of exhibited pictures belong to the macabre, including Swiss photographer Dominic Nahr's shot of a dead Sudanese soldier, floating in a pool of leaked oil which reflects a waiting heaven of blue sky & white clouds.

At one of the world's prominent photography museums, Foam held a retrospective for English photographer Stephen Gill named "Best Before End". Utilising experimental techniques to overcome the technical limitations of his equipment, Stephen captures his urban environment in Hackney with visual aplomb. Placing objects in the camera, burying photographs, and injecting fizzy drinks into the picture development process, unexpectedly yields beautifully misconstrued pictures that captivate the viewer.

Tasteless graffiti it may be - but having the subjects of Van Gogh's 'The Potato Eaters' eating fries outside the Westerkerk, made me laughed out loud at first sight. 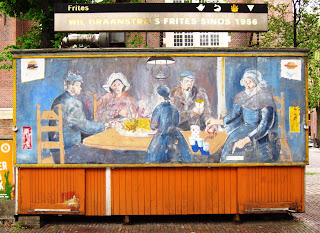